Our hats go off to Richard Branson and his Virgin Galactic adventure to the edge of space. Here is a great article describing Land Rover’s partnership with Virgin Galactic.

Virgin Galactic Goes Above and Beyond

In keeping with the spirit of taking adventurers above and beyond, Land Rover has partnered with Virgin Galactic, opening a new frontier for human exploration. On July 11, 2021, Sir Richard Branson—along with a full crew of Mission Specialists and spacecraft pilots—took the SpaceShipTwo Unity spacecraft beyond the stratosphere, marking the company’s first fully crewed space flight and taking a step toward the democratization of outer space. 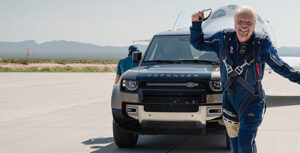 Up to the very moment of lift off, and following the craft’s successful landing, Land Rover was with these intrepid explorers as they traveled boldly into the great beyond.

Branson arrived for the Unity 22 mission in a Range Rover Astronaut Edition, and after a safe landing, his spacecraft was towed back to waiting well-wishers by a Land Rover Defender 110. Land Rover is proud to have aided the Virgin Galactic Unity 22 mission and to be embedded with the company as they continue to push adventure and discovery to new heights. In preparation for the mission, Land Rover was with Virgin Galactic every step of the way—towing space vehicles, carrying equipment and clearing runways before takeoff. 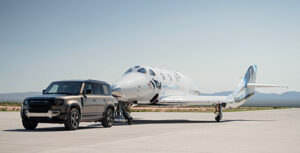 Here’s to a successful mission and many more to come.

You can read the original article here.