The temperatures in Death Valley are outrageous – 130 sizzling degrees on July 9, 2021!

This article from Accuweather describes the latest record temperatures in one of our favorite off-road tours destinations.

Extreme heat in Death Valley pushed the mercury up to 128 degrees Fahrenheit about three weeks ago, far above what’s normal there for this time of year. And another round of above-average heat was building in the region, sent temperatures skyrocketing to begin the weekend.

On Friday, the temperature at Death Valley soared to 130 degrees, breaking the previous daily record high of 129 set back in 1913, according to the National Weather Service. This reading comes within 4 degrees of the all-time world record of 134 F set there in 1913. The 134-degree mark happens to be the world record for the highest temperature ever measured on Earth.

High temperatures on Saturday and Sunday are also forecast to reach within a few degrees of 130 in Death Valley, and this reading may repeat on Monday.

Death Valley, along with parts of Nye County and the Mojave Desert, is under an excessive heat warning through 8 p.m. PDT Monday, according to the National Weather Service (NWS). On Wednesday, the first day of that warning, the temperature soared to 126 degrees in Death Valley. On Thursday, the high reached 126 degrees yet again, and Friday morning the mercury failed to fall below 100, reaching 130 later that afternoon.

On Friday, Las Vegas’ McCarran International Airport was experiencing multiple delays due to the excessive heat.

According to Flight Aware, 117 flights in the airport were delayed. 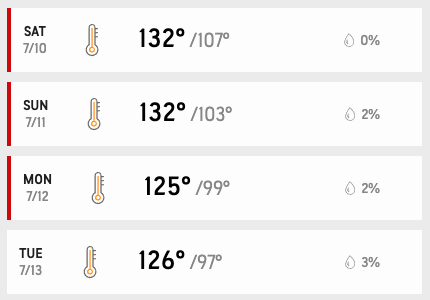 The AccuWeather.com Forecast for Death Valley, CA, as of July 10, 2021

You can read the complete original article here: https://www.accuweather.com/en/weather-forecasts/temperatures-in-death-valley-las-vegas-could-tie-records-in-heat-wave/976676